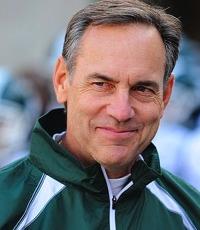 Before arriving in East Lansing, Dantonio was a head coach for three seasons at University of Cincinnati, compiling an 18–17 overall record including a win in the 2004 Fort Worth Bowl. In 2006, Dantonio was hired as the Michigan State Spartans head coach, returning to the school where he had previously served six years as an assistant coach under Nick Saban. During the 2010 season, Dantonio was named Big Ten Coach of the Year after he lead MSU to an 11-2 record.

On October 8, 2011, Dantonio signed a contract extension that made him a "Spartan for life." That season, MSU was selected to play in the Outback Bowl against a 10 win, SEC East Champion Georgia Bulldogs squad. Dantonio led his team to a thrilling triple overtime victory, his first bowl win at MSU. The Spartans reached the 11 win mark for the second straight season, finishing with an overall record of 11-3.

Secure Mark Dantonio for Your Event

Based on your interest in Mark Dantonio as a speaker or for a personal appearance, Direct Sportslink has provided you additional links below for other sports talent with similar appearance fees, speaker topics, and categories that match Mark Dantonio.