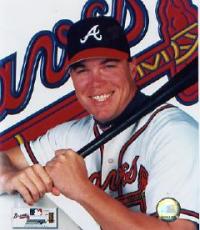 He is one of the best switch-hitters in the history of baseball; He was a member of the 1995 World Series Champion Atlanta Braves
Fee Range: $20,000 - $30,000
Secure Chipper Jones
for Your Event

Jones was selected by the Atlanta Braves in the 1st round (1st pick) of the 1990 amateur draft. He made a quick jump through the minors to make his major league debut on September 11, 1993.

In 1999, Jones won the National League MVP award after hitting .319 with 45 home runs and 110 RBI. Jones led the Braves to the World Series against the New York Yankees that year.

Secure Chipper Jones for Your Event

Based on your interest in Chipper Jones as a speaker or for a personal appearance, Direct Sportslink has provided you additional links below for other sports talent with similar appearance fees, speaker topics, and categories that match Chipper Jones.