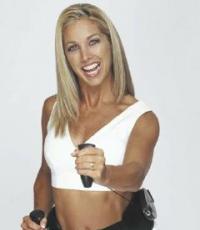 Denise Austin promotes a sensible, realistic, and enthusiastic approach to fitness and eating.

She has written numerous books on fitness. Sculpt Your Body with Balls and Bands, published in 2004, introduced a new system to help firm up and shed unwanted pounds in 12 minutes a day! Her ninth book, Eat Carbs, Lose Weight, was released in August 2005.  Meanwhile, her daily Morning Stretch newsletter, which provides healthy living tips, surpassed one million subscribers in June 2005.

In addition to books and videos, Denise has over 20 years experience on television which included shows such as; "Denise Austin's Daily Workout" and "Fit and Lite." "Daily Workout" began in 1987 under the name "Getting Fit" and aired for 10 years on ESPN. In January 1997, her show moved to sister station Lifetime TV, now the number-one cable network in the country! The show's 18-year history made "Denise Austin's Daily Workout" the longest running fitness show on television. In fact, the show was so successful on Lifetime that the network gave her a second show, which became how "Fit and Lite" came into being.

In 2002, President Bush appointed Denise as a member of the President's Council on Physical Fitness and Sports, an organization that strives to promote, encourage, and motivate Americans of all ages to become physically active and participate in sports.

She has become a veritable fitness empire, complete with books, shows, magazine columns, videos, and DVDs, as well as her own line of workout equipment, a signature shoe, bodywear by Danskin, and a skincare line. Denise believes her greatest achievement yet is being mom to her two daughters, Kelly and Katie.

Secure Denise Austin for Your Event

Based on your interest in Denise Austin as a speaker or for a personal appearance, Direct Sportslink has provided you additional links below for other sports talent with similar appearance fees, speaker topics, and categories that match Denise Austin.