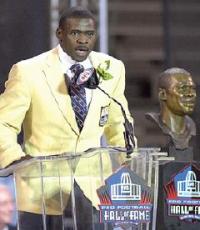 He is one of the greatest receivers in the history of the NFL; He was a key member of three Super Bowl Championship teams with the Dallas Cowboys; He is a member of the Pro Football Hall of Fame
Fee Range: $20,000 - $30,000
Secure Michael Irvin
for Your Event

One of 17 children, Irvin was born in Fort Lauderdale, Florida. He was a football star at St. Thomas Aquinas High School (Fort Lauderdale) and was heavily recruited by the University of Miami, one of the top collegiate football programs in the nation. With the University of Miami, under coach Jimmy Johnson, Irvin set school records for career receptions (143), receiving yards (2,423) and touchdown receptions (26). He was part of Miami's 1987 National Championship team, and made one of the most legendary plays in school history that year, scoring on a 73-yard fourth quarter touchdown pass from Steve Walsh that provided the margin of victory in Miami's triumph over archrival Florida State, which propelled them into the National Championship Game against the top ranked Oklahoma Sooners in the Orange Bowl.

Michael Irvin was nicknamed "The Playmaker" due to his penchant for making big plays in big games during his college career. Irvin is also known as one of The Triplets along with Troy Aikman and Emmitt Smith. The Triplets highlighted the Dallas Cowboys' offense in the 1990s that won three Super Bowls. In 2007, he was selected to the Pro Football Hall of Fame. After his playing career, Irvin has spent time as a NFL analyst with NFL Network and ESPN.

Secure Michael Irvin for Your Event

Based on your interest in Michael Irvin as a speaker or for a personal appearance, Direct Sportslink has provided you additional links below for other sports talent with similar appearance fees, speaker topics, and categories that match Michael Irvin.