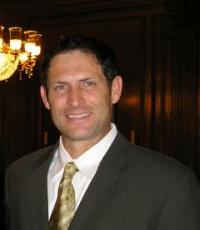 Hewlett Packard was looking for a reliable company to secure a top motivational speaker. They selected Direct Sportslink and we secured Steve Young for their national sales meeting. His speech was right on point and he threw signed footballs to the audience directing pass routes to conclude the event in style. Steve Young motivational speaking engagements, Steve Young appearances and Steve Young endorsements offer humor, sincerity, and credibility.

Young played college football at Brigham Young University where in 1983 he passed for 3,902 yards and 33 touchdowns in the regular season, and his 71.3% completion percentage set an NCAA single-season record. With Young at quarterback, BYU set an NCAA record by averaging 584.2 yards of total offense per game. Young capped his college career by scoring the game-winning touchdown in BYU's 21-17 victory over Missouri in the 1983 Holiday Bowl.

Young signed a record 10-year, $40m contract with the Los Angeles Express of the defunct United States Football League in 1984. However, the league ceased operations in 1985 after a disastrous move to a fall/winter schedule to compete with the National Football League, and Young signed with the Tampa Bay Buccaneers after being the first player selected in that year's supplemental draft. He was later traded to the San Francisco 49ers. Following an injury to Montana in the 1990 playoffs, Young got his chance to lead the 49ers in the 1991 season.

He won the NFL's Most Valuable Player award in 1992 and again in 1994. But the crowning achievement of the Steve Young-led San Francisco 49ers was, arguably, their dominating 49-26 win over the San Diego Chargers in Super Bowl XXIX. On the strength of a six touchdown performance that surpassed the previous record of five, owned by the man Young replaced: Joe Montana, Steve Young was named the game's Most Valuable Player.

After retiring in 1999, Steve Young became an analyst for ESPN, and appeared every week on NFL Countdown, ABC Sports' coverage of the playoffs and the Super Bowl, and on the Super Bowl edition of NFL Primetime. He has also served as a managerial director at Huntsman Gay Global Capital.

Secure Steve Young for Your Event

Based on your interest in Steve Young as a speaker or for a personal appearance, Direct Sportslink has provided you additional links below for other sports talent with similar appearance fees, speaker topics, and categories that match Steve Young.