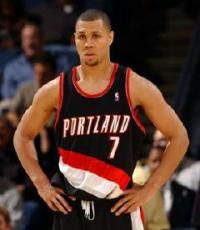 He was the 2006-07 NBA Rookie of the Year
Fee Range: Contact Us
Secure Brandon Roy
for Your Event

In his senior year with the Washington Huskies, Roy averaged 20.2 points per game while leading the Huskies to a 26-7 season and a second straight Sweet Sixteen appearance. Roy was named Pac-10 player of the year and received All-American honors at the end of the season, while also being a finalist for the Wooden, Naismith, Oscar Robertson, and Adolph Rupp awards. Roy was drafted with the sixth overall pick in the 2006 NBA Draft by the Portland Trail Blazers.

During his rookie season with the Trail Blazers, he was the Western Conference's Rookie of the Month in January, February, and March 2007. He led the Blazers to a 13-game winning streak in the month of December. After averaging 16.8 points, 4.4 rebounds and 4.0 assists per game during the 2006-07 NBA season, Roy was named NBA Rookie of the Year and was selected as a reserve for the 2008 NBA All-Star Game. He was the first Trail Blazer to participate in the All-Star Weekend since Rasheed Wallace's selection as an all star reserve in 2001.

Secure Brandon Roy for Your Event

Based on your interest in Brandon Roy as a speaker or for a personal appearance, Direct Sportslink has provided you additional links below for other sports talent with similar appearance fees, speaker topics, and categories that match Brandon Roy.