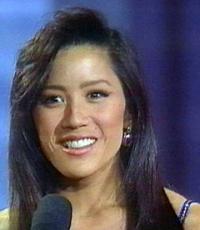 She is an internationally recognized fitness expert, actor, and anchor
Fee Range: Contact Us
Secure Kianna Tom
for Your Event

Kiana, Star, Host and Producer of ESPN2's most popular, trend setting, flagship fitness show, "KIANA'S FLEX APPEAL!" Kiana's Flex Appeal reached over 80 million homes worldwide and upon its debut in June 1995, became the "highest rated show in the history of the entire network" after only 1 week of airing! Due to Kiana and her show's tremendous success, ESPN created several shows for Kiana: "Kiana's Too Fit 2 Quit," "Summer Sizzle with Kiana" and "Hot Summer Nights with Kiana." Kiana went on to Host other shows for ESPN including "The Super Bowl Nightlife," "The X Games," "Extreme Energy" and "The Fitness America Pageant Series."

Kiana was awarded the prestigious United States Sports Academy Eisenhower Award, for her tremendous contributions, accomplishments and work in the fitness industry.

Secure Kianna Tom for Your Event

Based on your interest in Kianna Tom as a speaker or for a personal appearance, Direct Sportslink has provided you additional links below for other sports talent with similar appearance fees, speaker topics, and categories that match Kianna Tom.