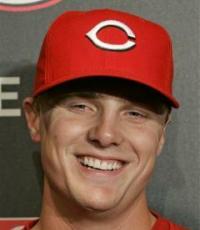 A Jay Bruce personal appearance, Jay Bruce speaking engagement, or Jay Bruce endorsement will reflect well on your company. To hire Jay Bruce now for any corporate appearance, fundraiser, motivational speaker event, personal appearance, autograph signing, or website endorsement please contact our celebrity agents at 1-877-6-SPORTS. We will contact Jay Bruce or contact Jay Bruce's agent and provide you with the booking fees and availability immediately upon your request. Direct Sportslink is the only sports speakers bureau and talent booking agency based in the United States securing only sports talent for corporations, associations, and organizations for motivational speaking engagements, personal appearances, and endorsements. We are the premier sports celebrity booking agency and a sports celebrity procurement expert. Accordingly, we will provide you with any relevant Jay Bruce website information and booking agent details so that you can hire Jay Bruce for your next event.

Jay Bruce's professional career began in 2005 in the GCL playing for the Reds' lowest rookie team. For the 2007 season, Bruce was placed with the Reds high-A team, the Sarasota Reds, then quickly promoted to the Red's AA team, the Chattanooga Lookouts. He was selected to the 2007 All-Star Futures Game. Bruce was then promoted to the Reds' AAA club, the Louisville Bats, where he ended the season by winning Baseball America's Player of the Year title. During the Cincinnati Reds' final game of the 2007 season, Bruce was recognized for winning the Minor League Player of the Year award.

On December 9, 2010 the Reds agreed to extend Bruce to a 6 year deal and it includes an option for a seventh year. He was selected to the 2012 MLB All-Star game.

Secure Jay Bruce for Your Event

Based on your interest in Jay Bruce as a speaker or for a personal appearance, Direct Sportslink has provided you additional links below for other sports talent with similar appearance fees, speaker topics, and categories that match Jay Bruce.