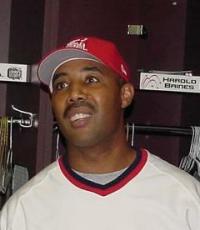 A long time player with the Chicago White Sox, he earned his first World Series ring in 2005 as a coach of the White Sox
Fee Range: $5,000 - $10,000
Secure Harold Baines
for Your Event

Baines began his career with the White Sox as the number-one pick in the amateur draft in 1977. In 1980 the smooth-swinging 20-year-old became a regular outfielder on the team, and began to produce in 1982 when he had 165 hits, 25 home runs and 105 RBIs. He ended the longest game in major league history with his home run against the Milwaukee Brewers' Chuck Porter on May 9, 1984; the bat he used is currently kept at the Baseball Hall of Fame. He also led the AL in slugging average in 1984.

In 1986, a succession of knee problems began which would gradually end his fielding career, forcing him to become a regular designated hitter. Despite the knee ailments he finished his career with 2,866 hits, 384 home runs and 1,628 RBIs. At the time of his retirement, his 1,652 games as a designated hitter were a major league record and he held several hitting records among DHs.

True to form, Baines' fourth stint with the Chicago White Sox began when he was named bench coach in March 2004. Baines has become such a big, yet soft-spoken, hero that people in Chicago and the nearby suburbs have even named their pets after him, according to The Commish Online, a baseball website.

On July 20, 2008, the White Sox unveiled a bronze statue of Baines at U.S. Cellular Field.

In August 2009 the Baltimore Orioles announced that Baines would be inducted into the Orioles Hall of Fame as the 46th member. In his seven seasons with the Orioles he batted .301, had 107 home runs, and 378 RBIs as their designated hitter.

Secure Harold Baines for Your Event

Based on your interest in Harold Baines as a speaker or for a personal appearance, Direct Sportslink has provided you additional links below for other sports talent with similar appearance fees, speaker topics, and categories that match Harold Baines.