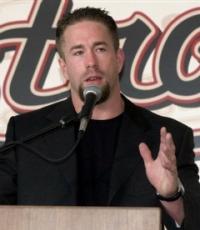 Having spent his entire 15 year MLB career in Houston, he is a fan favorite; His number 5 is retired by the Houston Astros
Fee Range: $30,000 - $40,000
Secure Jeff Bagwell
for Your Event

In Houston, Bagwell blossomed, becoming one of the best players in Astros franchise history. Bagwell spent his 15-year career in a Houston uniform and, along with teammate Craig Biggio, was synonymous with the Astros throughout the 1990's and into the 2000's.

The best year in Bagwell's professional career was the strike-shortened 1994 season when he was unanimously named National League. He became the first National Leaguer to finish first or second in batting average, home runs, RBI, and runs scored since Willie Mays in 1955. His .750 slugging percentage in 1994 was the highest by a National Leaguer since Rogers Hornsby in 1925. Bagwell won an MVP award in 1994.

Secure Jeff Bagwell for Your Event

Based on your interest in Jeff Bagwell as a speaker or for a personal appearance, Direct Sportslink has provided you additional links below for other sports talent with similar appearance fees, speaker topics, and categories that match Jeff Bagwell.