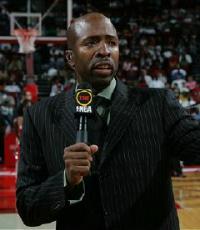 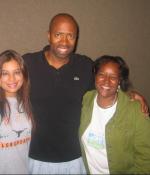 The Federal Deposit Insurance Corporation (FDIC) put their trust in Direct Sportslink to secure a popular Houston sports celebrity for their event in Houston, Texas. A multiple NBA Champion with the Houston Rockets, Kenny Smith was the ideal basketball star to share his NBA stories while meeting and greeting the FDIC guests.

Smith is a former standout guard at the University of North Carolina and pro basketball player. When Smith graduated from North Carolina in 1987, he held the school record for most assists with 768. Drafted as the number six overall pick in the 1987 NBA Draft by the Sacramento Kings, Smith played in the NBA for nine seasons.

During his career, Smith played for the Sacramento Kings, Detroit Pistons, Houston Rockets, and the Atlanta Hawks. In his rookie year, he was named to the "rookie team" with 13.8 points and 7.1 assists per game while playing with the Sacramento Kings. Smith won the 1994 and 1995 NBA championships with the Houston Rockets. He  also was the Rockets' all-time leader in three point field goal percentage with .407 and best field goal percentage of all NBA guards.

In 1998, Smith joined Turner Sports. He has been an anlayst for several networks including TNT, ESPN, and NBA TV.  He has also served as an analyst for the NCAA Men's Basketball Division I Basketball Tournament 2011 and 2012

Smith also created the Kenny Smith North Carolina Boy and Girls Basketball Camp that teaches young boys and girls about the rules and the game of basketball.

Secure Kenny Smith for Your Event

Based on your interest in Kenny Smith as a speaker or for a personal appearance, Direct Sportslink has provided you additional links below for other sports talent with similar appearance fees, speaker topics, and categories that match Kenny Smith.