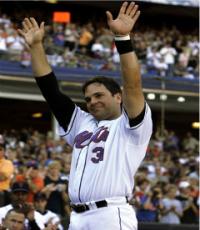 Regarded as the best hitting catcher of all time, Piazza played for the Los Angeles Dodgers, Florida Marlins, New York Mets, San Diego Padres and the Oakland Athletics during his career. He is a 12-time All-Star and at the time of retirement he held the career record for home runs hit by a catcher with 396.

Piazza helped the Mets win the World Series in 2000.

Piazza made a return to Shea Stadium during the "Shea Goodbye" closing ceremony on September 28, 2008, where he received the final pitch in the history of the stadium from Hall of Famer Tom Seaver. Piazza and Seaver were also afforded the immense honor of officially "closing" Shea when they walked off together into the center field exit and closed the door on the park after waving goodbye to the capacity crowd. The two are generally regarded as the greatest hitter and pitcher, respectively, in the history of the franchise.

He was elected to the Baseball Hall of Fame in 2015.

Secure Mike Piazza for Your Event

Based on your interest in Mike Piazza as a speaker or for a personal appearance, Direct Sportslink has provided you additional links below for other sports talent with similar appearance fees, speaker topics, and categories that match Mike Piazza.