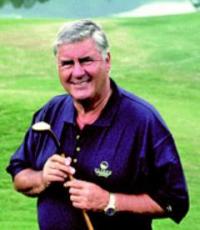 He is an Emmy award winning former golf and sports broadcaster who spent 23 years with CBS
Fee Range: $20,000 - $30,000
Secure Ben Wright
for Your Event

Ben Wright is an Emmy and Peabody award winning announcer for golf and many other sports broadcasts for CBS TV for 23 years, Ben Wright, though a native of England, resides in Flat Rock, North Carolina, a short distance from the course he designed: The Cliffs Valley located in Travelers Rest, SC.

Wright, who has attended major golf events since 1954 and has announced the world's best matches, including the Ryder Cup and the Masters at Augusta National Golf Club.

Wright designed and built the Cliffs Valley golf course, which opened for play in 1994. For the first four years of its inception, the BMW Charity Pro-Am at The Cliffs golf tournament was regarded as the premier event on the Nationwide Tour.

A prolific writer, Wright is a published author of two books: his autobiography Good Bounces and Bad Lies and Speak Wright. He served as Editor-at-Large for Links magazine and has been a contributing editor with his column "There I Was." Wright was awarded the MacGregor golf writing contest in both 1982 and 1989. He was also featured in Kevin Costner's successful golf film Tin Cup.

Secure Ben Wright for Your Event

Based on your interest in Ben Wright as a speaker or for a personal appearance, Direct Sportslink has provided you additional links below for other sports talent with similar appearance fees, speaker topics, and categories that match Ben Wright.