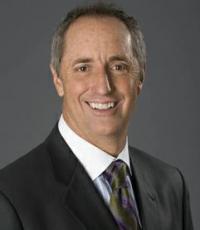 He has become one of the most popular sportswriters in the industry since joining Sports Illustrated in 1985
Fee Range: $20,000 - $30,000
Secure Rick Reilly
for Your Event

Reilly is one of the most popular sportswriters in the industry because of his light-hearted human interest pieces in SI. His column on Sports Illustrated's back page was called "The Life of Reilly." He spent 23 years with SI before moving to ESPN in 2007. He has worked for ESPN The Magazine, ESPN.com, SportsCenter and other programs on the ESPN family of networks.

He co-wrote "Leatherheads," a film starring and directed by George Clooney released in April 2008.

Reilly has published many works throughout his career, including 'Missing Links,' a novel about an eccentric group of golfers who are regulars at the worst course in America, its sequel, 'Shanks for Nothing,' 'The Life of Reilly,' an anthology of Reilly's best early works from Sports Illustrated, 'Hate Mail from Cheerleaders and Other Adventures from the Life of Reilly,' an anthology consisting of one-hundred of Reilly's best weekly articles from 2000-2006, and 'Who's Your Caddy,' a collection of stories about Reilly caddying for several remarkable people ranging from Donald Trump to the blind golfing world champion.

Secure Rick Reilly for Your Event

Based on your interest in Rick Reilly as a speaker or for a personal appearance, Direct Sportslink has provided you additional links below for other sports talent with similar appearance fees, speaker topics, and categories that match Rick Reilly.