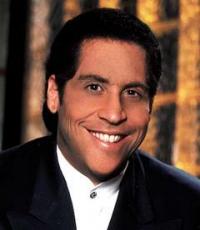 He is one of Americas most decorated interviewers; He won seven Emmy Awards as a talk show host on ESPN
Fee Range: $20,000 - $30,000
Secure Roy Firestone
for Your Event

More compelling than any speech, more memorable than any routine, Firestone's hilarious, moving and highly motivational multi-media review salutes the best of sports. One of America's most versatile talents, Roy Firestone is recognized for his multiple abilities as an interviewer, journalist, commentator and stage performer.

Critically acclaimed for his work in broadcast journalism, Mr. Firestone has interviewed more than 3,000 people, including nearly every major sports figure and has won seven Emmy's as host of ESPN's talk shows, for more than two decades.

Roy Firestone continues to generate honors as one of America's most decorated and celebrated interviewers. He has interviewed more than 5,000 celebrities.

Secure Roy Firestone for Your Event

Based on your interest in Roy Firestone as a speaker or for a personal appearance, Direct Sportslink has provided you additional links below for other sports talent with similar appearance fees, speaker topics, and categories that match Roy Firestone.