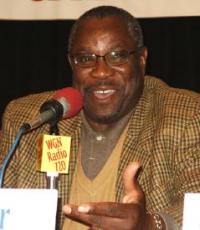 He was a member of the 1981 World Series Champion Los Angeles Dodgers and has managed several MLB teams
Fee Range: $20,000 - $30,000
Secure Dusty Baker
for Your Event

After leading the San Francisco Giants in 2002 to the World Series, where they were defeated by the Anaheim Angels, he guided the Chicago Cubs to the NLCS in 2003. Championship-starved Cubs fans immediately embraced Baker, and the shirts bearing the slogan "IN DUSTY WE TRUSTY" became best-sellers throughout the 2003 season. The Cubs came within 5 outs of reaching the Series before losing to the Florida Marlins in 7 games, following the Steve Bartman incident in Game 6; Baker would have become the first manager to lead different teams to the World Series in consecutive years.

Dusty Baker was named the manager of the Cincinnati Reds in 2007.

Baker also had an illustrious career as an outfielder for the Atlanta Braves, Los Angeles Dodgers, San Francisco Giants, and Oakland A's from 1968 to 1986, winning a World Series as a player with the Dodgers in 1981. Baker was on deck when Hank Aaron hit his 715th home run, breaking the record previously held by Babe Ruth.

Secure Dusty Baker for Your Event

Based on your interest in Dusty Baker as a speaker or for a personal appearance, Direct Sportslink has provided you additional links below for other sports talent with similar appearance fees, speaker topics, and categories that match Dusty Baker.