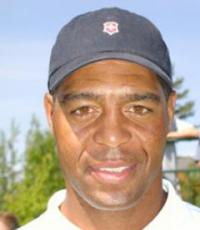 Marcus Allen ran for 12,243 yards and caught 587 passes for 5,411 yards during his career for both the Los Angeles Raiders and the Kansas City Chiefs from 1982 to 1997. He scored 145 touchdowns including a then league record 123 rushing touchdowns and was elected to six Pro Bowls when he retired. Allen was the first player ever to gain more than 10,000 rushing yards and 5,000 receiving yards during his career.

USC has retired his jersey number (#33), and coach John Robinson called Allen "The greatest player I ever saw."

Allen is best remembered for his heroics in Super Bowl XVIII. He ran for 191 yards, caught 2 passes for 18 yards, and scored 2 touchdowns in the Raiders 38-9 victory over the Washington Redskins. This included a 74-yard touchdown run, a record that was the longest run in Super Bowl history, until Super Bowl XL when it was broken by Willie Parker, by a single yard.

He joined the Kansas City Chiefs in 1993 where he scored 12 touchdowns, leading the AFC, as he and Joe Montana led the Chiefs to the AFC Championship Game and was named the NFL Comeback Player of the Year that season. Allen went on to play for the Chiefs for four more seasons, leading the team in rushing every year but his last. Allen's main contribution to the Chiefs was his leadership abilities. The Chiefs won more games than any other NFL team during his tenure in Kansas City. Allen retired after 1997 season.

A motivational speaking engagement by Marcus Allen would connect you with one of the greatest college and professional football players of all-time. He has played with and for some of the greatest names in football, including Ronnie Lott and Jim Plunkett.

Marcus Allen makes many appearances throughout the year at various celebrity golf tournaments. Additionally, you can often catch him on the sidelines of a big USC college football game.

Marcus Allen is a popular sports celebrity that would resonate well for any company, particularly an endorsement of a product or company in the

Secure Marcus Allen for Your Event

Based on your interest in Marcus Allen as a speaker or for a personal appearance, Direct Sportslink has provided you additional links below for other sports talent with similar appearance fees, speaker topics, and categories that match Marcus Allen.