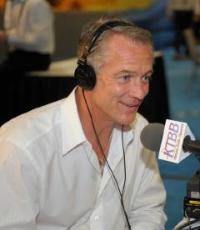 Nicknamed Moose, he is regarded as one of the best fullbacks to ever play in the NFL
Fee Range: $5,000 - $10,000
Secure Daryl Johnston
for Your Event

Daryl "Moose" Johnston attended Syracuse University where he was  an All-Big East selection in 1988 and an All-American in 1989.

Johnston was drafted by the Dallas Cowboys in the second round of 1989 NFL Draft. There he received his nickname "Moose" from backup quarterback Babe Laufenberg.

In the NFL, he scored 22 career touchdowns but had more receptions in his career than carries. In 1993 Johnston had 50 receptions and averaged 7.4 yards per catch. Johnston earned a trip to the Pro Bowl in 1993 and 1994. Johnston was a member of three Super Bowl winning teams.

Johnston was considered one of the best fullbacks of his day, while blocking for Emmitt Smith, as Smith went on to become the all-time NFL rushing leader.

Johnston has been a major contributor to many charities including the Special Olympics, Children's Cancer Fund, Cystic Fibrosis and Literacy Instruction for Texas (LIFT). He has also served as honorary chairman for MDA's "Aisles of Smiles" campaign, and for the American Cancer Society's Gunslingers' Ball. In 1999, Johnston's numerous community service activities led to his nomination for the prestigious "Whizzer White Humanitarian Award."

After retiring, he has spent much of his time as a NFL television and radio analyst.

Secure Daryl Johnston for Your Event

Based on your interest in Daryl Johnston as a speaker or for a personal appearance, Direct Sportslink has provided you additional links below for other sports talent with similar appearance fees, speaker topics, and categories that match Daryl Johnston.