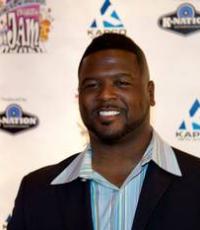 He was a four time Pro Bowl selection; He was a member of the Super Bowl XXXI Champion Green Bay Packers
Fee Range: $2,000 - $5,000
Secure LeRoy Butler
for Your Event

LeRoy Talking to the BGC Guests

Direct Sportslink secured LeRoy Butler for a Wisconsin Boys and Girls Club event. LeRoy was the keynote speaker for the banquet and was most gracious of his time sharing stories with all the kids. The originator of the Lambeau Leap, a LeRoy Butler appearance, LeRoy Butler autograph signing, or LeRoy Butler speaking engagement is sure to be a success with any Packers fans.

During his 12 seasons with the Packers, he recorded 953 tackles, 38 interceptions, 553 return yards, 12 fumble recoveries, 3 defensive touchdowns and 20½ sacks. He led or tied for the team lead in interceptions in five different seasons. He was the first defensive back in NFL history to gain entrance in the 20 Sack/20 Interception Club.

A broken shoulder blade sustained while making a tackle against the Atlanta Falcons in the 2001 season forced him into retirement just before the 2002 season.

Secure LeRoy Butler for Your Event

Based on your interest in LeRoy Butler as a speaker or for a personal appearance, Direct Sportslink has provided you additional links below for other sports talent with similar appearance fees, speaker topics, and categories that match LeRoy Butler.