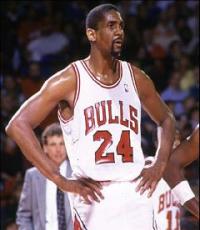 Cartwright played his college ball at the University of San Francisco, and was a consensus second team all-American in 1977 and 1979. He graduated as the all-time leading scorer for the USF Dons, averaging 19.1 points and 10.2 rebounds per game. Cartwright led San Francisco to three trips to the NCAA tournament, including a first round in the 1977 Tournament, and to the Sweet Sixteen in the 1978 and 1979 Tournaments.

He played 16 seasons for the New York Knicks, Chicago Bulls and Seattle SuperSonics, helping the Bulls capture consecutive NBA championships in 1991, 1992 and 1993.

He has spent much of his career after playing in the NBA as a coach in the NBA.

Secure Bill Cartwright for Your Event

Based on your interest in Bill Cartwright as a speaker or for a personal appearance, Direct Sportslink has provided you additional links below for other sports talent with similar appearance fees, speaker topics, and categories that match Bill Cartwright.