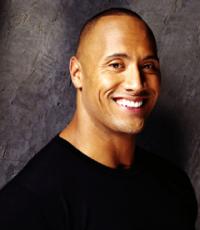 Dwayne Douglas Johnson, better known by his stage name The Rock, is an American actor and former professional wrestler. He has starred in such motion pictures as Be Cool, Walking Tall, The Mummy Returns, The Rundown, The Scorpion King, Doom, and others. He is of multiracial descent, as his father is a Black Canadian and mother is Samoan.

Johnson's popularity as The Rock propelled him to the WWF Championship at the 1998 Survivor Series at age 26. At the time, he was the youngest WWF Champion in history,and the first polynesian to do so, siding with Vince McMahon and Shane McMahon as the crown jewel of their "Corporation" stable.

At WrestleMania XX, the Rock had possibly his last ever match with WWE. In March of 2004, Mick Foley was facing seemingly overwhelming odds against Ric Flair, Batista, and Randy Orton, the stable collectively known as Evolution. The Rock returned to aide his old friend and the match was made for WMXX to feature Mick & the Rock against Flair, Batista and Orton. Evolution emerged victorious after Orton nailed Foley with an RKO and scored the pinfall. The Rock would later participate in numerous antics over the summer of 2004 with the Diva Search contestants and Eugene. He has not made a live apperance on WWE television since, although his bio continues to be listed on WWE.com as a "RAW Superstar".

In interviews conducted in 2005, Johnson revealed that his contract with World Wrestling Entertainment expired at the end of 2004. He has since moved into the acting profession with numerous roles, including a major role in Scorpions King which grossed over 90 million dollars.

Secure Dwayne Johnson for Your Event

Based on your interest in Dwayne Johnson as a speaker or for a personal appearance, Direct Sportslink has provided you additional links below for other sports talent with similar appearance fees, speaker topics, and categories that match Dwayne Johnson.