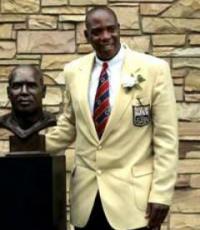 Newsome was a star at the University of Alabama and played for the Cleveland Browns in the NFL. He made the College Football All-America Team in 1977 and assisted the Crimson Tide to a 42-5 overall record during his four seasons. In total, Newsome amassed 102 receptions for 2,070 receiving yards. His 20.3 average yards per catch was a conference record. In 1994, Newsome was enshrined in the College Football Hall of Fame.

After graduating college, he was the Browns' first-round draft pick in 1978. He was All-Pro and was named to three Pro Bowls. He ultimately caught 662 passes for 7,980 yards and 47 touchdowns, and had a catch in every game for 150 consecutive games. He recorded career-best 89 catches in 1983, and recorded it again in 1984. He retired in 1990 as the NFL's all-time leading tight-end receiver. He was elected to the Pro Football Hall of Fame in 1999. Newsome made NFL history on November 22, 2002, when he became the first ever African-American general manager in the league.

Since retiring, Newsome has worked in various positions for the Baltimore Ravens, including General Manager.

Secure Ozzie Newsome for Your Event

Based on your interest in Ozzie Newsome as a speaker or for a personal appearance, Direct Sportslink has provided you additional links below for other sports talent with similar appearance fees, speaker topics, and categories that match Ozzie Newsome.