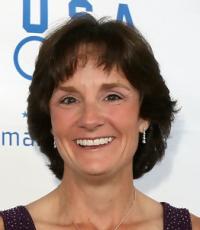 She is one of the most decorated female athletes in Olympic history; She became the first American woman to win five gold medals; She is a member of the U.S. Olympic Hall of Fame
Fee Range: $10,000 - $20,000
Secure Bonnie Blair
for Your Event

Blair competed for the United States in four Olympics, and in her Olympic career won five gold medals and one bronze medal.

The 1994 Winter Olympics in Lillehammer, Norway were a coronation of sorts for Blair. She again won gold in the 500 meters (39.25) and 1000 (1:18.74) meters races, in dominating fashion. Blair finished .36 seconds ahead of the second best time in the 500 meters, and her 1.38 second margin in the 1000 meters race is the largest margin of victory in the history of the event. In the process she became the first American woman to win five gold medals.

Blair won several prestigious awards, including the 1992 Sullivan Award and Sports Illustrated Sportsperson of the Year, along with Johann Olav Koss, in 1994. She also was Female Athlete of the Year as selected by the Associated Press in 1994. Blair also won the World Cup points championship 11 times.

In 2004, she was elected to the United States Olympic Hall of Fame.

Secure Bonnie Blair for Your Event

Based on your interest in Bonnie Blair as a speaker or for a personal appearance, Direct Sportslink has provided you additional links below for other sports talent with similar appearance fees, speaker topics, and categories that match Bonnie Blair.