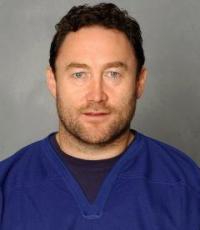 John "The Eagle" Belfour played junior hockey for the Winkler Flyers before going to the University of North Dakota where he helped the school win the NCAA championship in the 1986-87 season. The following year, Belfour signed as a free agent with the Chicago Blackhawks.

In the 1990-91 season, Belfour turned in what many consider to be one of the best rookie seasons in NHL history. He notched 43 victories in 74 games (both rookie records), finished the season with a 2.47 GAA and 4 shutouts. For his success, he received the Calder Memorial Trophy for outstanding play by a rookie, the Vezina Trophy for best goaltender and the William M. Jennings Trophy for fewest team goals-against. He would win the Vezina Trophy again in 1993 and the Jennings Trophy in 1993, 1995, and 1999.

Belfour was then traded to the San Jose Sharks, then signed as a free agent with the Dallas Stars on July 2, 1997. Belfour helped the Dallas Stars to their first Stanley Cup, beating the Buffalo Sabres in six games.

On July 2, 2002, Ed signed as a free agent with the Toronto Maple Leafs. In his first season with his new club, he won a franchise-record 37 games and helped the team finish second in the Northeast Division. He earned his 400th career win in a match against the Devils.

Secure Ed Belfour for Your Event

Based on your interest in Ed Belfour as a speaker or for a personal appearance, Direct Sportslink has provided you additional links below for other sports talent with similar appearance fees, speaker topics, and categories that match Ed Belfour.