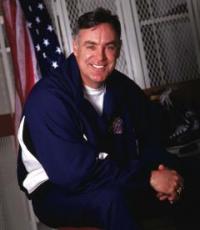 A Jim Craig personal appearance, Jim Craig speaking engagement, or Jim Craig endorsement will reflect well on your company. To hire Jim Craig now for any corporate appearance, fundraiser, motivational speaker event, personal appearance, autograph signing, or website endorsement please contact our celebrity agents at 1-877-6-SPORTS. We will contact Jim Craig or contact Jim Craig's agent and provide you with the booking fees and availability immediately upon your request. Direct Sportslink is the only sports speakers bureau and talent booking agency based in the United States securing only sports talent for corporations, associations, and organizations for motivational speaking engagements, personal appearances, and endorsements. We are the premier sports celebrity booking agency and a sports celebrity procurement expert. Accordingly, we will provide you with any relevant Jim Craig website information and booking agent details so that you can hire Jim Craig for your next event.

- Team Building
- Creating and Building Great Groups
- Identifying the Right People for the Right Position
- Innovation and Strategic Change
- Making a Difference - Build Your Legacy
- Peak Performance
- Rebounding from Setback and Defeat
- Recruiting - What it Takes to Be a Gold Medal Winner
- Kids and Teenagers: Healthy Living, Making the Right Choices, and - Pursuing Your Dreams

Jim Craig has been called the backbone of a team that accomplished one of the most extraordinary and memorable sports victories of all time. He went on to play professionally and transitioned to tremendous and ongoing success in the business world.

Jim is in demand from coast to coast and internationally as a motivational speaker, spokesperson, marketing and sales strategist, and master storyteller.  He is president of Gold Medal Strategies, a Boston-area based promotions and marketing firm that also manages and represents Jim and his appearance business. Over the past 25 years, Jim has inspired, instructed, and provided strategic and winning direction for employees and associates from more than 300 organizations, including Allianz, Ameriprise, Bayer Corporation, Buena Vista Home Entertainment, Coca-Cola, Dunkin' Donuts, Evergreen Financial, GE, Gore Medical, John Hancock, Merrill Lynch, Monsanto, Next Financial, Pepsi, Time Inc., Walt Disney, Welch's, and other companies that hold some of the world's most recognized brands.

An All-American goalie at Boston University and standout for the Terriers' 1978 NCAA championship squad, Jim was selected as the starting goaltender for the U.S. 1980 Olympic hockey team. At the Lake Placid games his performance was phenomenal. Indispensable to Team U.S.A.'s epic victory in what some have called a miraculous upset of the Soviet Union was the play of Jim Craig. In the game against the Soviets, the Americans were outshot 42-16, but Jim made 39 saves, many of the spectacular variety, and his teammates scored four times. Two days later, against Finland, Jim was again superb, and the Yanks won, 4-2, to take Olympic gold.

How incredible was the victory over the Soviets? Consider that as the 20th century came to a close, most major media sports polls selected what happened two decades prior in Lake Placid, as the number one sports episode of the previous 100 years.

"It may just be the single most indelible moment in all of U.S. sports history," said Sports Illustrated of Team USA's win over the Soviet Union.  "One that sent an entire nation into frenzy."

When Jim retired from pro hockey, he pursued a marketing and sales career with the same passion, focus, work ethic, and dedication that he put forth on the ice. He signed on as marketing and sales consultant for Valassis Inserts, owned by Australian media magnate Kerry Packer's Consolidated Press Holdings and the largest freestanding newspaper insert company in the U.S. While with Valassis Inserts and later Valassis Communications (also owned by Consolidated Press Holdings), Jim took an operating unit that had $300,000 in annual sales and over a 10 year period built it to unit that did $50 million in annual sales, the top sales-producing division of the corporation. During these years, Jim received "Salesman of the Year" awards from the Marketing Corporation of America and Valassis Communications.

Jim left Valassis in 2005 to become the top salesman of Hat Trick Group, a company that creates and produces promotions, incentive marketing, and custom premium programs and products.  Under his stewardship and guidance, Hat Trick Group developed new products and services and increased annual dollar sales by 80 percent and its number of clients by 30 percent.

In 2007, Jim directed his competitive zeal and devotion to innovation and teamwork to the launch and operation of Gold Medal Strategies.  Still in its infancy, the firm has as growing roster of highly satisfied clients all receiving premium value and competitive advantage.

Jim has volunteered for several years as a youth hockey coach and contributes to and supports many philanthropic organizations and causes, including taking to the ice with the Boston Bruins Alumni to play in benefit games.

Secure Jim Craig for Your Event

Based on your interest in Jim Craig as a speaker or for a personal appearance, Direct Sportslink has provided you additional links below for other sports talent with similar appearance fees, speaker topics, and categories that match Jim Craig.