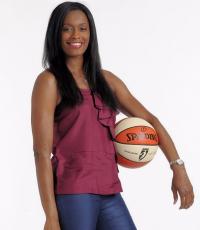 A Swin Cash personal appearance, Swin Cash speaking engagement, or Swin Cash endorsement will reflect well on your company. To hire Swin Cash now for any corporate appearance, fundraiser, motivational speaker event, personal appearance, autograph signing, or website endorsement please contact our celebrity agents at 1-877-6-SPORTS. We will contact Swin Cash or contact Swin Cash's agent and provide you with the booking fees and availability immediately upon your request. Direct Sportslink is the only sports speakers bureau and talent booking agency based in the United States securing only sports talent for corporations, associations, and organizations for motivational speaking engagements, personal appearances, and endorsements. We are the premier sports celebrity booking agency and a sports celebrity procurement expert. Accordingly, we will provide you with any relevant Swin Cash website information and booking agent details so that you can hire Swin Cash for your next event.

Swin Cash was an All-American at the University of Connecticut (UConn). She won the NCAA Women's Division I Basketball Championship with the UConn Huskies in 2000 and 2002. She also helped lead UConn to an undefeated 39-0 season in 2002. Swin was a member of the inaugural class (2006) of inductees to the University of Connecticut women's basketball "Huskies of Honor" recognition program.

Cash was selected by the Detroit Shock in the 2002 WNBA Draft, second overall. After leading the Shock's resurgence in the second half of her rookie season, she then led the Detroit Shock to their first WNBA Championship title in 2003. She played in the 2003 WNBA All-Star Game and won the gold medal with the U.S. women's basketball team at the 2004 Olympic Games.

In the off-season, Cash has appeared as a studio analyst on ESPN's NBA Fastbreak and during the 2008 Beijing Olympic games, she alternated with Teresa Edwards in presenting in-game commentary for NBC's presentation of the women's basketball tournament from the network's New York broadcast studios. Swin appeared (as herself) in the movie Bring It On: All or Nothing.

Cash received the Dapper Dan Sportswoman of the Year award in April 2007. This is an award given to someone who shows excellence to the Pittsburgh area. She was also honored with Sidney Crosby and Dan Rooney. On February 19, 2008 Cash was traded to the Seattle Storm. Cash helped the Storm win their second championship in 2010. On January 2, 2012, in perhaps the WNBA's biggest blockbuster trade news thus far, Cash was traded, along with Le'Coe Willingham, to the Chicago Sky joining All- Star Sylvia Fowles.

Cash was one of 21 finalists for the U.S. Women’s Olympic Basketball Team Roster to compete in the 2012 London Olympics. Off the court, Cash has also founded the Pennsylvania based Cash for Kids charitable organization.

Secure Swin Cash for Your Event

Based on your interest in Swin Cash as a speaker or for a personal appearance, Direct Sportslink has provided you additional links below for other sports talent with similar appearance fees, speaker topics, and categories that match Swin Cash.