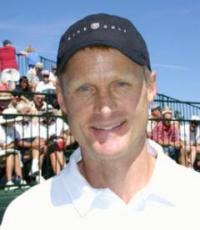 He was a member of five NBA World Championship teams; He retired as the all-time leader in three-point shooting percentage for a career (.454)
Fee Range: $5,000 - $10,000
Secure Steve Kerr
for Your Event

A 15-year NBA veteran, Kerr won four consecutive NBA Championship rings (three with the Chicago Bulls from 1996-1998 and one with the San Antonio Spurs in 1999). Kerr was the second player in NBA history to win championships with two different teams in consecutive seasons.

Drafted by the Phoenix Suns in the 1988 NBA Draft, Kerr was traded to the Bulls in 1989. He spent three years there and played one season with the Orlando Magic before being traded to the Chicago Bulls in 1993 and was part of the Bulls' team that set a record for the most wins in a season (72) during the 1995-96 season.

Kerr made the memorable shot that gave the Chicago Bulls the win over the Utah Jazz in Game 6 of the 1997 NBA Finals, making them back-to-back NBA World Champions. He was a member of the Bulls' team when they repeated their victory over the Jazz in the 1998 NBA Finals, he was then traded to the San Antonio Spurs where he helped them earn an NBA title the following year.

Secure Steve Kerr for Your Event

Based on your interest in Steve Kerr as a speaker or for a personal appearance, Direct Sportslink has provided you additional links below for other sports talent with similar appearance fees, speaker topics, and categories that match Steve Kerr.