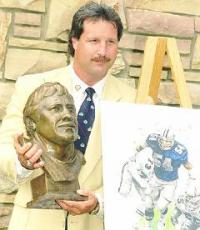 Randy was recruited by Maryland and played as a fullback during his freshman year. During his sophomore season, new head coach Jerry Claiborne moved Randy to defensive end, noting that he had the skill to be "one of the best five linemen in the U.S." The move was a natural fit, as by his senior year, he was, as Claiborne put it, "as fast as some of the offensive backs I had coached." In that senior year (1974), he won numerous awards and honors, including the Outland Trophy, the Lombardi Award, and the Atlantic Coast Conference Player of the Year. Though Maryland lost in the Liberty Bowl that season to Tennessee, Randy was named the game's Most Valuable Player. In 1994, he was elected to the College Football Hall of Fame and in 2000 was named to ABC sports All-time All-America Team.

Drafted by the Dallas Cowboys in 1975, he was moved to middle linebacker, where he played mostly on special teams his first two seasons, including his rookie season when Dallas lost to the Pittsburgh Steelers in Super Bowl X. During his third season (1977), he was moved to defensive tackle. That year would prove to be his breakout year: he was named to his first All-Pro team, his first Pro Bowl, and was named co-MVP (with Harvey Martin) of Super Bowl XII, making him one of only a few defensive players to win that honor. He would continue that success, being named to nine consecutive All-Pro and Pro Bowl teams.

He would retire in 1988 having played 209 games in 14 seasons, only missing one game during that span. During those 14 years, he played in three Super Bowls, six NFC Championship Games, and accumlated 1,104 tackles (701 solo) and 111 sacks. He was elected to the Pro Football Hall of Fame in 1994.

Secure Randy White for Your Event

Based on your interest in Randy White as a speaker or for a personal appearance, Direct Sportslink has provided you additional links below for other sports talent with similar appearance fees, speaker topics, and categories that match Randy White.