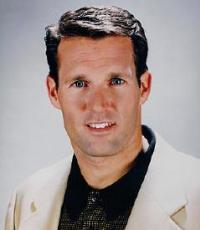 He is best known for winning a speedskating gold medal in his final Olympic race after suffering through years of heartbreak
Fee Range: $5,000 - $10,000
Secure Dan Jansen
for Your Event

Jansen, inspired by his sister Jane, took up speedskating while growing up in Wisconsin. He would set a junior world record in the 500 meter race at the age of sixteen, and would finish sixteenth in the 500 meters and fourth in the 1000 meters at the 1984 Winter Olympics.

As the 1988 Winter Olympics approached, Jansen was a favorite in the 500 and 1000 meter races, having improved in the years between Olympics, while overcoming a case of mononucleosis in 1987. However, on the day of the race, he received a phone call saying that Jane was dying of leukemia. Several hours after speaking to his dying sister, he was informed that she was dead. That night, he would fall while competing in the 500 meters. Later in those Olympics, he would fall again in the 1,000, and would leave with no medals.

Jansen would arrive at the 1992 Winter Olympics as a favorite yet again. A year before, he set a world record in the 500 meters, among his other accompishments. But disaster struck again, as he finished fourth in the 500 meters and twenty-sixth in the 1000 meters. So once again, Jansen would leave the Olympics with no medals.

The 1994 Winter Olympics would be Jansen's final attempt to win an Olympic medal of any kind. Between the 1992 and 1994 Olympics, he would have the distinction of being the only man to break 36 seconds in the 500 meters, doing so four times in those years. In the 500 meters, he would finish eighth, and went into the 1000 meters with the assumption that he would end his career without any Olympic medals. Instead, he won his first and only gold medal in his career, as he set a new world record in the process, and he would dedicate his gold medal to his late sister. For his efforts, Jansen received the 1994 Sullivan Award.

Jansen was inducted into the US Olympic Hall of Fame in 2004. He appeared in a commercial for Visa, directed by Emmy nominee Brent Roske, during the 2010 Winter Olympics.

Secure Dan Jansen for Your Event

Based on your interest in Dan Jansen as a speaker or for a personal appearance, Direct Sportslink has provided you additional links below for other sports talent with similar appearance fees, speaker topics, and categories that match Dan Jansen.