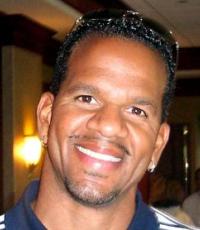 Andre Reed played wide receiver in the NFL for 16 seasons, 15 with the Buffalo Bills (1985-1999) and one with the Washington Redskins (2000). He is widely considered one of the best wide receivers to ever play the game.

In addition to the important role he played in taking the Bills to four Super Bowls, Reed is remembered particularly for his contributions to the Bills' January 3, 1993 playoff victory over the Houston Oilers, a game that has come to be known simply as "The Comeback". In the game, which Houston led 35-3 at half time, Reed caught three touchdowns in the second half to lead the Bills to the largest comeback in the history of the NFL. The game is considered one of the most extraordinary comebacks in all of American sports.

Secure Andre Reed for Your Event

Based on your interest in Andre Reed as a speaker or for a personal appearance, Direct Sportslink has provided you additional links below for other sports talent with similar appearance fees, speaker topics, and categories that match Andre Reed.