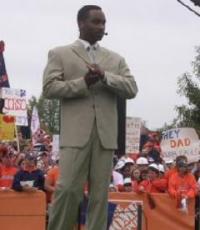 He was one of the greatest kick returners in college football history while playing for Notre Dame
Fee Range: $5,000 - $10,000
Secure Rocket Ismail
for Your Event

Ramadian "Rocket" Ismail is best known as one of the greatest kick returners in college football history, playing for the University of Notre Dame under legendary coach Lou Holtz, and for his nine seasons in the National Football League with the Los Angeles and Oakland Raiders, the Carolina Panthers, and the Dallas Cowboys. However, his greatest impact on sport may have come when he was signed to the Canadian Football League for an unheard-of $18.2 million over 4 years in 1991.

Nicknamed "The Rocket", Ismail stood only 5'11" tall but had strong hands and blazing speed on a football field, making him exceptionally dangerous both as a kick returner and as a receiver. Ismail recorded two 1,000-yard receiving seasons in the NFL and was a CFL All-Star in 1991, as well as the most valuable player of the 79th Grey Cup.

In the United States Ismail is still remembered largely for his college career at Notre Dame, where he still is considered one of the most dynamic and exciting players to ever have played in college football. Twice an All-American and one of the greatest receivers and kick returners at Notre Dame, Ismail had a significant impact on the Canadian Football League. Ismail brought the CFL exposure in the United States that it had never had before, and rejuvenated the struggling Toronto Argonauts.

Till this day, though, "The Rocket" still has an important meaning when looking back at college football in the late 1980's and early 1990's. He was considered one of the most dramatic players to ever play the game, and is part of the unmatched lore of Notre Dame Football, becoming another symbol of college football excellence.

Secure Rocket Ismail for Your Event

Based on your interest in Rocket Ismail as a speaker or for a personal appearance, Direct Sportslink has provided you additional links below for other sports talent with similar appearance fees, speaker topics, and categories that match Rocket Ismail.