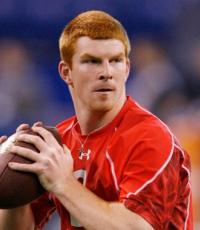 Dalton played college football at Texas Christian University. In his final college game, the 2011 Rose Bowl versus the Wisconsin Badgers, Dalton led the Horned Frogs to a 21-19 win over the three point underdog Badgers. He finished college as a two time Honorable Mention All-American.

He was selected by the Bengals in the second round (thirty-fifth overall) of the 2011 NFL Draft and signed a four-year contract. New Bengals offensive coordinator Jay Gruden instituted a west coast-style offensive scheme to help maximize Dalton's talents, and he and rookie receiver A.J. Green, the Bengals 2011 first round selection from the University of Georgia, have become a prolific quarterback/receiver combination.

Due to his red hair, Dalton has been nicknamed The Red Rifle by Bengals fans. Other nicknames include 007 (shared surname with James Bond actor Timothy Dalton), Roadhouse (the main character in the movie is named Dalton), and Shawshank (the two protagonists in The Shawshank Redemption are named Andy and Red).

He was given the NFLPA Emerging Player Award in 2011.

Secure Andy Dalton for Your Event

Based on your interest in Andy Dalton as a speaker or for a personal appearance, Direct Sportslink has provided you additional links below for other sports talent with similar appearance fees, speaker topics, and categories that match Andy Dalton.