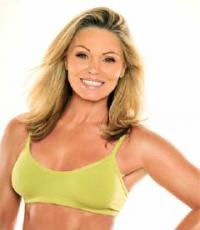 She was the renowned host of Buns of Steel and Abs of Steel; She is a worldwide fitness expert who has authored several best selling fitness books, videos, and co-hosted major cable fitness shows
Fee Range: $5,000 - $10,000
Secure Tamilee Webb
for Your Event

In 1993, Tamilee was recognized by her peers with the Fitness Instructor of the Year award, bestowed by IDEA, the association of fitness professionals, after having been a three-time nominee in the category. In 1992, she received the coveted Self Magazine Award for best lower body exercise for her third in a series of twenty-two award-winning Buns of Steel videos. Tamilee has been the recipient of numerous other awards for outstanding achievement in the field of personal fitness, including Best Exercise Video and Best Training Organization 1987, conferred by IDEA, has been honored by California State University, Chico, Outstanding Alumni of 1990 and 1996.

Millions of fans worldwide have long admired Tamilee's no-nonsense approach to mind, body, health and fitness that can be achieved within the home. Her energy, exuberance and specially designed proven workout programs have consistently elevated her to the top of the Billboard charts. Her three best-selling books "The Original Rubber Band Workout" (sold in six countries and translated into five languages), "Step-up Fitness", both published by Workman Publishers, and her third book, "Workout for Dummies" (IDG Books), have contributed to the renown that she has so deservedly earned.

Tamilee has been a co-host on the Health Network Channel's aerobic fitness shows. The network services more than 50 million households and its audience continues to grow rapidly. She has also hosted ESPN's Fitness Pro Series, co-hosted the Buns of Steel Platinum Series, and the Buns of Steel Quick-Toning Series, and acted as a consultant for Fox Sport Body Squad Fitness Programs.

Tamilee's knowledge and acquired experience, combined with her contagious energy, and effervescent personality, have made her an ideal guest speaker on top-rated television talk shows, including VH1 Booty Call, NBC's Weekend Today, Entertainment Tonight, KTLA Morning News, The Today Show, The Other Half, Home Matters, and "E" Entertainment. Her well-toned body has graced the covers of Shape Magazine, Home Gym and Fitness Magazine, and Diet and Exercise Magazine, and she has been featured in S.D. Sports and Fitness, Fit Magazine, Men's Fitness Magazine, Vogue and Billboard.

Secure Tamilee Webb for Your Event

Based on your interest in Tamilee Webb as a speaker or for a personal appearance, Direct Sportslink has provided you additional links below for other sports talent with similar appearance fees, speaker topics, and categories that match Tamilee Webb.