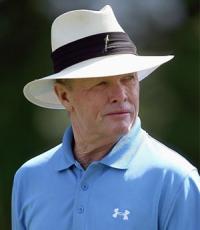 He won the 1992 U.S. Open; He became a member of the World Golf Hall of Fame in 2004; He was a member of seven Ryder Cup squads
Fee Range: Contact Us
Secure Tom Kite
for Your Event

A Tom Kite personal appearance, Tom Kite speaking engagement, or Tom Kite endorsement will reflect well on your company. To hire Tom Kite now for any corporate appearance, fundraiser, motivational speaker event, personal appearance, autograph signing, or website endorsement please contact our celebrity agents at 1-877-6-SPORTS. We will contact Tom Kite or contact Tom Kite's agent and provide you with the booking fees and availability immediately upon your request. Direct Sportslink is the only sports speakers bureau and talent booking agency based in the United States securing only sports talent for corporations, associations, and organizations for motivational speaking engagements, personal appearances, and endorsements. We are the premier sports celebrity booking agency and a sports celebrity procurement expert. Accordingly, we will provide you with any relevant Tom Kite website information and booking agent details so that you can hire Tom Kite for your next event.

Tom Kite spent 175 weeks in the top-10 of the Official World Golf Rankings between 1989 and 1994. He began playing golf at age six, and won his first tournament at age 11. Kite attended the University of Texas on a golf scholarship. He turned professional in 1972 and has been a consistent money winner ever since.

Kite was inducted into the World Golf Hall of Fame in 2004.

Secure Tom Kite for Your Event

Based on your interest in Tom Kite as a speaker or for a personal appearance, Direct Sportslink has provided you additional links below for other sports talent with similar appearance fees, speaker topics, and categories that match Tom Kite.