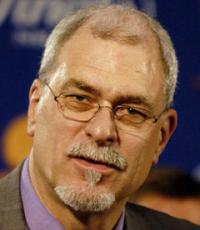 He is tied with Red Auerbach for coaching the most NBA teams (nine) to a championship
Fee Range: $75,000 - $100,000
Secure Phil Jackson
for Your Event

Jackson is known for both his triangle offense ballplaying scheme as well as an holistic approach to coaching players, influenced by Eastern philosophy, notably Zen. The latter is the source of his sports media nickname: "The Zen Master".

In 1967, he was drafted by the New York Knicks out of North Dakota. He was a top reserve on the Knicks team that won the NBA title in 1973 Soon after the second title, several key starters of the championship teams retired, eventually forcing Jackson into the starting lineup, where he played briefly until retiring in 1980.

Jackson was the head coach of the NBA's Chicago Bulls from 1989 to 1998, and of the Los Angeles Lakers from 1999 to 2004 and again from 2005-2011. Jackson has a total of 11 NBA championship rings: two as a player with the New York Knicks, six as coach of the Bulls, and three as coach of the Lakers. He is one of the all-time great coaches in any sport, having coached well known basketball players such as Michael Jordan, B.J. Armstrong, Ron Harper, Kobe Bryant, Shaquille O'Neal, Robert Horry, Derek Fisher, Scottie Pippen, and Steve Kerr.

Secure Phil Jackson for Your Event

Based on your interest in Phil Jackson as a speaker or for a personal appearance, Direct Sportslink has provided you additional links below for other sports talent with similar appearance fees, speaker topics, and categories that match Phil Jackson.