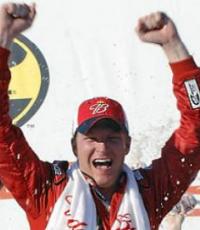 "Junior's" career began meekly, as he and brother Kerry sold a go-kart for $500 so that they could buy an old Monte Carlo racecar for $200. Legend has it that Junior later sold that car to current Busch Series driver Hank Parker Jr.

He took his first green flag at the Concord Speedway in the street stock division at the age of 17. He garnered three feature victories from 1994-96.

Junior wasted no time making an impact in NASCAR's elite series when he entered in 2000. He won at Texas in his 12th career start and at Richmond in his 16th start. He also became the first rookie to win NASCAR's all-star race at Lowe's Motor Speedway.

It also didn't take long for Junior to become the unofficial poster boy of the sport. He's appeared on countless magazine covers, numerous television talk shows and was the focus of two MTV documentaries: "Cribs" and "True Life, I'm a Race Car Driver."

On December 1, 2011, it was announced that Dale Jr. won the Most Popular Driver award for the 9th consecutive time.