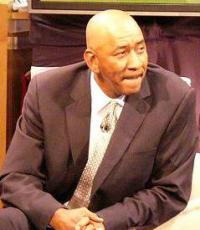 Nicknamed, "The Iceman", he is one of the most prolific scorers in NBA history; He is best known for his smooth style of play and his famous finger roll shots
Fee Range: $5,000 - $10,000
Secure George Gervin
for Your Event 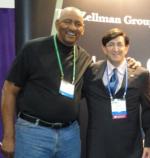 George Gervin was the celebrity guest at the RILA convention where he signed autographs, took pictures, and mingled with the trade show guests. After the convention, Iceman was the celebrity guest at the client's hospitality suite at the Orlando Magic basketball game. It was a great day for all the guests and a special opportunity to hang out with a true basketball legend.

Known as the "Iceman" because of his coolness, Gervin grew up in a Detroit ghetto and learned basketball on playgrounds. He won a scholarship to Long Beach State University, but transferred after one semester to Eastern Michigan University.

The Virginia Squires chose him in the first round of a special ABA draft during the 1972-73 season. Gervin was named to the league's all-rookie team even though he played in only 30 games that season. The financially trouble Virginia team sold him to the San Antonio Spurs in January of 1974.

The spidery, 6-foot-7, 185-pounder was basically a guard during his professional career, but was also often used at forward. His speed, leaping ability, and long arms made him a dazzling performer driving to the basket and he could keep defenders honest by hitting the medium-range jump shot, as well.

Secure George Gervin for Your Event

Based on your interest in George Gervin as a speaker or for a personal appearance, Direct Sportslink has provided you additional links below for other sports talent with similar appearance fees, speaker topics, and categories that match George Gervin.