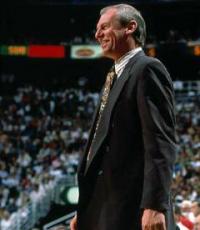 He is a member of the Basketball Hall of Fame; He is the all-time leading scorer for the University of Kentucky
Fee Range: $5,000 - $10,000
Secure Dan Issel
for Your Event

A Dan Issel personal appearance, Dan Issel speaking engagement, or Dan Issel endorsement will reflect well on your company. To hire Dan Issel now for any corporate appearance, fundraiser, motivational speaker event, personal appearance, autograph signing, or website endorsement please contact our celebrity agents at 1-877-6-SPORTS. We will contact Dan Issel or contact Dan Issel's agent and provide you with the booking fees and availability immediately upon your request. Direct Sportslink is the only sports speakers bureau and talent booking agency based in the United States securing only sports talent for corporations, associations, and organizations for motivational speaking engagements, personal appearances, and endorsements. We are the premier sports celebrity booking agency and a sports celebrity procurement expert. Accordingly, we will provide you with any relevant Dan Issel website information and booking agent details so that you can hire Dan Issel for your next event.

Some players earn fancy nicknames just on reputation, Dan Issel earned his on blood, sweat and tears. During his era, Dan Issel, nicknamed "The Horse," was the hardest working man in professional basketball. A 15-year veteran of both the ABA and NBA, Issel played in 1,218 of 1,242 possible games, a consistency streak rivaled by few. If you asked Dan Issel to evaluate his own career, points, rebounds, blocks and steals wouldn't be mentioned. Durability and an old-fashioned blue-collar work ethic would be his calling card. Dan Issel embarked on professional basketball career with a vengeance following a brilliant scholastic and collegiate career. The Batavia, IL, native earned All-America honors on both the high school (Batavia H.S.) and college (Kentucky) levels. He set several school records and averaged 33.9 ppg as a senior while playing for Hall of Fame Coach Adolph Rupp.

Issel's first five professional years were spent with the Kentucky Colonels of the ABA. As a rookie with the Colonels in 1971, Issel led the ABA in scoring (29.9 ppg), and was named Rookie of the Year. He was named MVP of the ABA All-Star Game in 1972 and led the Colonels to the 1975 championship. Issel became a Denver Nugget in 1975, and played 10 seasons in Denver. Issel, who coached the Nuggets from 1992 to 1995 (34 games in the 1994-95 season), compiled a 96-102 record, a mark that included an improbable first round upset of the top-seeded Seattle Supersonics in the 1994 playoffs.

One of the most prolific scorers in basketball history, at the time of his retirement, Issel ranked fifth in the combined ABA/NBA all-time scoring list with 27,482 points, a 22.6 ppg average. He trailed only Kareem Abdul-Jabbar, Wilt Chamberlain, fellow Hall of Fame 1993 classmate Julius Erving, and Moses Malone in points scored. In 1985, the Professional Basketball Writers Association of America presented Issel with the J. Walter Kennedy Award for community service.

Secure Dan Issel for Your Event

Based on your interest in Dan Issel as a speaker or for a personal appearance, Direct Sportslink has provided you additional links below for other sports talent with similar appearance fees, speaker topics, and categories that match Dan Issel.