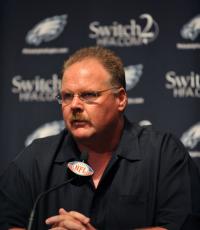 He has been named NFL Coach of the Year; He coached the Philadelphia Eagles to numerous NFC Championship games
Fee Range: $20,000 - $30,000
Secure Andy Reid
for Your Event

An Andy Reid personal appearance, Andy Reid speaking engagement, or Andy Reid endorsement will reflect well on your company. To hire Andy Reid now for any corporate appearance, fundraiser, motivational speaker event, personal appearance, autograph signing, or website endorsement please contact our celebrity agents at 1-877-6-SPORTS. We will contact Andy Reid or contact Andy Reid's agent and provide you with the booking fees and availability immediately upon your request. Direct Sportslink is the only sports speakers bureau and talent booking agency based in the United States securing only sports talent for corporations, associations, and organizations for motivational speaking engagements, personal appearances, and endorsements. We are the premier sports celebrity booking agency and a sports celebrity procurement expert. Accordingly, we will provide you with any relevant Andy Reid website information and booking agent details so that you can hire Andy Reid for your next event.

After graduating from BYU in 1981, Reid spent one year as a graduate assistant on the school's football coaching staff. He spent the next nine years as an offensive line coach with four different colleges.  He was hired as an assistant coach by the Green Bay Packers in 1992, the same year quarterback Brett Favre became a member of that team. Reid was named the Packers' quarterbacks coach in 1997, the season after the Packers won Super Bowl XXXI.

The quality of Reid's work with the Packers attracted considerable notice throughout the league, leading to his hiring as the head coach of the Philadelphia Eagles on January 11, 1999. Beginning in 2001, Reid's Eagles won the National Football Conference's Eastern Division four consecutive times, the longest such streak in franchise history, and advanced to the conference championship game in 2001, 2002, 2003 and 2004, losing this game on the first three occasions. The Eagles made it to Super Bowl XXXIX but fell to the New England Patriots 24-21 in the final minutes.

In 2001, Reid was named executive vice president of football operations of the Eagles, effectively making him the team's general manager. In 2013, after many years in Philadelphia, he was named Head Coach of the Arizona Cardinals.

Secure Andy Reid for Your Event

Based on your interest in Andy Reid as a speaker or for a personal appearance, Direct Sportslink has provided you additional links below for other sports talent with similar appearance fees, speaker topics, and categories that match Andy Reid.