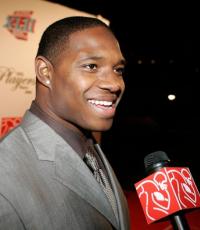 After being drafted in the second round of the 2006 NFL Draft, Jones-Drew was used mostly for kick-off returns, but he eventually became the Jaguars' primary third-down running back, behind Fred Taylor. After a relatively slow start, Jones-Drew suddenly exploded. Against the Colts on December 10, 2006, Jones-Drew set a franchise record with 166 rushing yards and 303 All-Purpose Yards, which included a 93-yard kickoff return for touchdown.

He finished 3rd in the NFL in both kickoff returns (27.7 yd avg) and touchdowns scored (16). He was also one of only two players in the NFL to score at least one TD rushing, receiving, and returning kicks. He also led all AFC running backs in scrimmage yards per touch. Narrowly missing 1,000 yards for the season, Jones-Drew's rushing average of 5.7 yds per carry was 1st in the NFL for backs with 100 attempts.

Jones-Drew had a record-breaking season for the Jaguars in 2009. In a 13-30 loss in Tennessee during Week 8, Jones-Drew rushed for 177 yards and two touchdowns on only 8 carries, one for 80 yards and another for 79 yards. This performance tied Hall of Famer Barry Sanders' record of rushing for two touchdowns in a single game of 75 yards or more.

At seasons end Jones-Drew compiled some nice statistics. He rushed for 1,391 yards on 312 attempts for a 4.5 per carry average and 15 TD's. After the 2010 season, he was named Running Back of the Year by the NFL Alumni Association. Maurice Jones-Drew led the NFL in rushing yards during the 2011 season where he finished with 1,606 rushing yards. Jones-Drew was named to the 2012 NFL Pro Bowl. In 2014 he signed with the Oakland Raiders.

Secure Maurice Jones-Drew for Your Event

Based on your interest in Maurice Jones-Drew as a speaker or for a personal appearance, Direct Sportslink has provided you additional links below for other sports talent with similar appearance fees, speaker topics, and categories that match Maurice Jones-Drew.