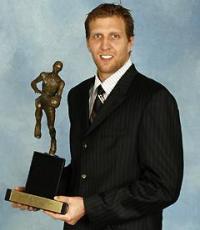 He led the Dallas Mavericks to win the 2011 NBA Championship; He is one of the best NBA players of all time and a Dallas fan favorite
Fee Range: Contact Us
Secure Dirk Nowitzki
for Your Event

As of 2011, Nowitzki has led the Mavericks to eleven consecutive NBA Playoffs, including an NBA Finals appearance in 2006 and the franchise's first championship in 2011, making him one of only five players in NBA history to win the championship while being the only NBA All-Star on the team.

He is the first European-born player in NBA history to receive the NBA Most Valuable Player award. He is the first Maverick ever to be voted into an All-NBA Team and also holds several all-time Mavericks franchise records.

A Dirk Nowitzki guest appearance would be a big success due to his popularity among women and men.

Utlizing Dirk Nowitzki in an endorsement of your product would be well received due to his poise and character. He is a fan favorite in Dallas and and your brand or product would be affiliated with one of the best players to ever play in the NBA.

Secure Dirk Nowitzki for Your Event

Based on your interest in Dirk Nowitzki as a speaker or for a personal appearance, Direct Sportslink has provided you additional links below for other sports talent with similar appearance fees, speaker topics, and categories that match Dirk Nowitzki.