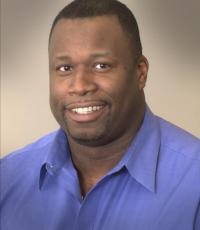 He was named Football News Freshman of the Year, Second Team All-American, and Big Eight Conference Newcomer of the Year in 1982
Fee Range: $5,000 - $10,000
Secure Marcus Dupree
for Your Event

Dupree was one of the best recruited high school football players. He went on to play at Oklahoma, where he was named Football News Freshman of the Year, second team All-American and Big Eight Conference Newcomer of the Year, before leaving in the middle of his sophomore season and briefly attending the University of Southern Mississippi without playing a single game there. He joined the United States Football League the following season and signed with the New Orleans Breakers in 1984. He played for the Breakers (which moved to Portland, Oregon before his second season) for two seasons, before a knee injury forced him to leave the game. He returned to professional football five years later in 1990, joining the Los Angeles Rams. Two years after he was released by the Rams, he performed as a professional wrestler for the USWA in 1995, ran a sports bar and worked as a casino greeter.

The college recruiting of Dupree was the subject of a book by Willie Morris titled The Courting of Marcus Dupree and an ESPN documentary on Dupree, titled "The Best That Never Was" and directed by Jonathan Hock, premiered on November 9, 2010 as part of the 30 for 30 series of 30 films celebrating ESPN's 30th anniversary.

Secure Marcus Dupree for Your Event

Based on your interest in Marcus Dupree as a speaker or for a personal appearance, Direct Sportslink has provided you additional links below for other sports talent with similar appearance fees, speaker topics, and categories that match Marcus Dupree.