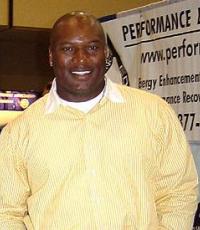 Cabela's was in search of a popular sports star who was also a well known outdoorsman. After several sports celebrity recommendations, Cabela's hired Direct Sportslink to secure Bo Jackson for their annual employee appreciation day. Bo was fantastic. He spent the entire afternoon with their employees and even gave a motivational speech to the local high school football team.

Vincent Edward "Bo" Jackson is a former multi-sport athlete who played professional football in the NFL and Major League Baseball simultaneously, and was the first athlete named an All-Star in both sports.

Jackson was drafted by the Tampa Bay Buccaneers with the first pick of the 1986 draft, but he opted to play baseball for the Kansas City Royals instead, spending most of the season in the minor leagues before being called up for regular duty in 1987, when he had 22 home runs, 53 RBIs and 10 stolen bases as an outfielder for the Royals. He began to show his true potential in 1989, when he was selected to the American League All-Star team, and was named the game's MVP for his play on both offense and defense.

In both baseball and football, Jackson's feats became the stuff of folklore and legend. Jackson became a popular figure for his athleticism in multiple sports through the late 1980s and early 1990s. He endorsed Nike and launched a popular ad campaign called "Bo Knows" which envisioned Jackson attempting to take up a litany of other sports, including tennis, golf, luge, auto racing, and even blues music with Bo Diddley.

However, during an Oakland Raiders playoff game against the Cincinnati Bengals in 1991, Jackson suffered a serious hip injury which ended his football career and seriously threatened his baseball career. His power remained, however he no longer possessed his blazing speed. For the 1994 season, he was sent to the California Angels for one final season before retiring.

After 20 years since his famous "Bo knows" campaign, Jackson returned to do commercials for Nike in the fall of 2010 for their "BOOM" campaign.

Jackson was named a 2011 winner of the NCAA Silver Anniversary Award, given annually to six former NCAA student-athletes for distinguished career accomplishment on the 25th anniversary of their college graduation.

Secure Bo Jackson for Your Event

Based on your interest in Bo Jackson as a speaker or for a personal appearance, Direct Sportslink has provided you additional links below for other sports talent with similar appearance fees, speaker topics, and categories that match Bo Jackson.