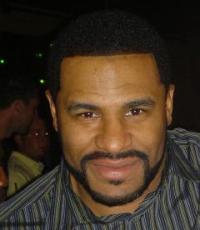 At the time of retirement he was 5th on the NFL all-time rushing list; He retired a Super Bowl Champion for the Pittsburgh Steelers
Fee Range: $30,000 - $40,000
Secure Jerome Bettis
for Your Event

Bettis was picked in the first round (10th overall) of the 1993 draft by the Los Angeles Rams. A star even in his rookie year, he rushed for 1429 yards in 1993, and was named Offensive Rookie of the Year. He rushed for over 1,000 in his second season with the Rams but his carries declined as he fell out of favor with the team.

After Rams head coach Chuck Knox retired and was replaced by Rich Brooks, Bettis was traded to Pittsburgh in 1996.

For his long career in the NFL, and his status as a native of Detroit, Jerome Bettis was awarded the key to the city of Detroit.

In February 2006, NBC Sports announced that Bettis had been signed as a studio commentator for NBC's new Football Night in America Sunday night pregame show. He is an avid bowler and has several perfect (300) games to his credit. In April, the International Bowling Museum & Hall of Fame announced Bettis would be the first inductee into its Celebrities Bowling Hall of Fame.

Secure Jerome Bettis for Your Event

Based on your interest in Jerome Bettis as a speaker or for a personal appearance, Direct Sportslink has provided you additional links below for other sports talent with similar appearance fees, speaker topics, and categories that match Jerome Bettis.