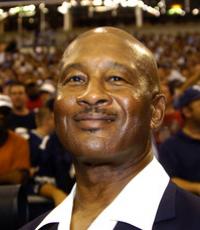 He is a 10 time Pro Bowl selection; He is inducted into the College and Pro Football Hall of Fame
Fee Range: $2,000 - $5,000
Secure Mel Renfro
for Your Event

Mel Renfro Signing for a Guest

Renfro attended the University of Oregon, where he excelled as a track star and as a two-way football player, an All-American halfback and defensive back. In his three seasons with the Ducks, Renfro rushed for 1,532 yards and scored 141 points. In 1986, Renfro was enshrined in the College Football Hall of Fame and is a member of The Pigskin Club of Washington, D.C., a National Intercollegiate All-American Football Players Honor Roll.

Renfro was drafted by the Dallas Cowboys in the second round of the 1964 NFL Draft. He was initially placed as a safety, but was switched to cornerback in his fifth season. The speedy Renfro became an exceptional threat to wide receivers. Mel led the NFL with 10 interceptions in 1969. Renfro was selected to the Pro Bowl in each of his first ten seasons in the League, including five All-Pro selections in 1964, 1965, 1969, 1971, and 1973. Mel also was a significant threat on special teams, performing punt and kickoff return duties in addition to playing on defense, leading the league in punt and kickoff return yardage in 1964.

In his fourteen seasons, Renfro intercepted 52 passes, returning them for 626 yards and 3 touchdowns. He also returned 109 punts for 842 yards and 1 touchdown, 85 kickoffs for 2,246 yards and 2 touchdowns, along with recording 13 fumble recoveries, which he returned for 44 yards. In the 1970 NFC title game, Renfro had a key interception that led to the Cowboys' game-winning touchdown over the San Francisco 49ers that helped them get to Super Bowl V, where they would eventually lose. He would later play in Super Bowls VI, X and XII, retiring after the final one, a Cowboys victory over the Denver Broncos.

Renfro was added to the Texas Stadium Ring of Honor in 1981, and was elected to the Pro Football Hall of Fame in 1996. To view more Direct Sportslink speaker and appearnce bookings of Mel Renfro please visit the Official Mel Renfro Website.

Secure Mel Renfro for Your Event

Based on your interest in Mel Renfro as a speaker or for a personal appearance, Direct Sportslink has provided you additional links below for other sports talent with similar appearance fees, speaker topics, and categories that match Mel Renfro.