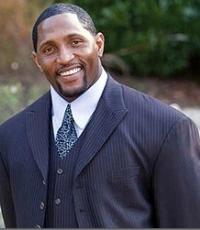 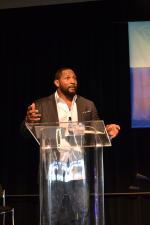 Direct Sportslink secured Ray Lewis as the keynote motivational speaker for EGIA's closing keynote presentation at their annual conference in Cleveland, Ohio. Ray Lewis is one of the most passionate, dynamic, open hearted speakers you will ever hear. Sharing his story and background, talking about football, leadership, teamwork, and the traits that made him one of the greatest NFL players ever captured this audience's attention. One of his many great quotes is "If you don't stand for something you will fall for anything." Ray Lewis will inspire you! To secure Ray Lewis for your next event, motivational keynote speaker conference, or any type of personal appearance please contact a Direct Sportslink booking agent today.

A Ray Lewis personal appearance, Ray Lewis speaking engagement, or Ray Lewis endorsement will reflect well on your company. To hire Ray Lewis now for any corporate appearance, fundraiser, motivational speaker event, personal appearance, autograph signing, or website endorsement please contact our celebrity agents at 1-877-6-SPORTS. We will contact Ray Lewis or contact Ray Lewis' agent and provide you with the booking fees and availability immediately upon your request. Direct Sportslink is the only sports speakers bureau and talent booking agency based in the United States securing only sports talent for corporations, associations, and organizations for motivational speaking engagements, personal appearances, and endorsements. We are the premier sports celebrity booking agency and a sports celebrity procurement expert. Accordingly, we will provide you with any relevant Ray Lewis website information and booking agent details so that you can hire Ray Lewis for your next event.

Throughout his career Lewis built a reputation as a leader and intimidating force at middle linebacker. Lewis has appeared in television ads for NFL Network, Reebok, Under Armour, Old Spice and Eastern Motors. He was the featured athlete on the cover of Madden NFL 2005.

Lewis has been heavily involved in charitable activities throughout his professional career. He started the Ray Lewis 52 Foundation which is a non-profit corporation whose mission is to provide personal and economic assistance to disadvantaged youth. He has since been involved in pressing political, business, and philanthropic leaders for a stronger commitment to disability sports both here and in the developing world. Lewis was also honored with a JB award (named in honor of CBS broadcaster James Brown) during the 2006 off-season and received the "Act of Kindness" Award for his work in the community. On May 11, 2010, a portion of Baltimore's North Avenue was renamed "Ray Lewis Way" in honor of the linebacker and his charitable work.

Secure Ray Lewis for Your Event

Based on your interest in Ray Lewis as a speaker or for a personal appearance, Direct Sportslink has provided you additional links below for other sports talent with similar appearance fees, speaker topics, and categories that match Ray Lewis.