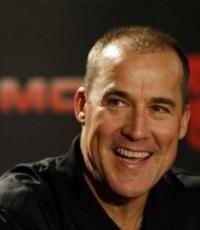 He played on three NBA Championship teams with the Chicago Bulls
Fee Range: $5,000 - $10,000
Secure John Paxson
for Your Event

John Paxson played college basketball at Notre Dame, where he was named a second team All-American in 1983. His professional career was mostly with the Chicago Bulls. He proved to be a valuable 3-point marksman and clutch time asset in the Bulls' first three championships.

Paxson is better known for his play during the 1993 NBA Finals, when he played for the Chicago Bulls against the Phoenix Suns. In Game 6 of those Finals, at the America West Arena in Phoenix, with the Bulls down 98 to 96 and facing a Game 7 if they lost that day, Paxson took a three point shot and sank it with three seconds left, giving the Bulls a 99-98 lead which they held to secure their third consecutive world title. That shot became known as the NBA's version of the shot heard around the world.

In April 2003, Paxson became Vice President of Basketball Relations for the Bulls. That summer, he was promoted to General Manager after the retirement of longtime Bulls GM Jerry Krause. He remains a very popular figure in the Chicago area and to all Bulls fans nationwide.

Based on your interest in John Paxson, Direct Sportslink has provided you the website links for other popular Chicago Bulls players we have secured for events including; Charles Oakley, B.J. Armstrong, and Ron Harper. To secure a John Paxson personal appearance or John Paxson speaking engagement please contact our celebrity booking agents and we will provide you with an immediate John Paxson fee quote and availability.

Secure John Paxson for Your Event

Based on your interest in John Paxson as a speaker or for a personal appearance, Direct Sportslink has provided you additional links below for other sports talent with similar appearance fees, speaker topics, and categories that match John Paxson.