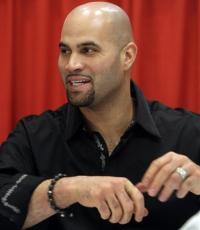 He was the starting first baseman for the World Series Champion Cardinals in 2006 and 2011
Fee Range: Contact Us
Secure Albert Pujols
for Your Event

Pujols is considered one of the top players in Major League Baseball history.

Albert and Deidre Pujols launched the Pujols Family Foundation, which is dedicated to their "commitment to faith, family and others." The organization promotes awareness of Down syndrome and works to support those who have it and their families, aids the poor in the Dominican Republic, and supports people with disabilities and/or life threatening illnesses.

Secure Albert Pujols for Your Event

Based on your interest in Albert Pujols as a speaker or for a personal appearance, Direct Sportslink has provided you additional links below for other sports talent with similar appearance fees, speaker topics, and categories that match Albert Pujols.