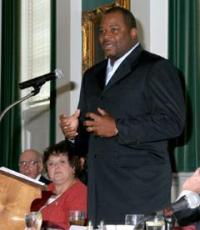 He enjoyed a stellar NFL career as a six-time Pro Bowl selection and a Super Bowl ring with the Green Bay Packers
Fee Range: $5,000 - $10,000
Secure Keith Jackson
for Your Event

Before his NFL career, Jackson played for the University of Oklahoma, where he was nicknamed Boomer Sooner. He assisted the Sooners to a 42-5-1 record in his four seasons and a national championship in 1985. He caught a total of 62 passes for 1,407 yards and was a College Football All-America Team selection in 1986 and 1987. Jackson was inducted into the College Football Hall of Fame in 2001.

After being drafted by the Philadelphia Eagles in 1988, Jackson recorded 81 receptions for 869 yards and 6 touchdowns in his first season, along with seven catches for 142 yards in the Eagles' only playoff game that year, and won the NFC Rookie of the Year award. In his nine seasons, Jackson made the Pro Bowl six times. In his final season, Jackson made 40 receptions for 505 yards and a career-high 10 touchdowns, assisting the Green Bay Packers to a 13-3 record and a win in Super Bowl XXXI.

After his NFL career, Jackson became a color commentator on radio broadcasts for the Arkansas Razorbacks.

Secure Keith Jackson for Your Event

Based on your interest in Keith Jackson as a speaker or for a personal appearance, Direct Sportslink has provided you additional links below for other sports talent with similar appearance fees, speaker topics, and categories that match Keith Jackson.