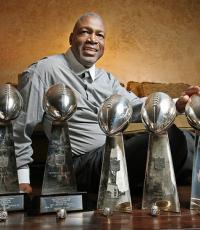 He is the first player to be on five Super Bowl winning teams; He was a five time Pro Bowl selection
Fee Range: $5,000 - $10,000
Secure Charles Haley
for Your Event

Charles was a starter for the James Madison Dukes during his entire college career (1982-1985). He was a two-time All-American and finished his career as the school's leading tackler with 506 stops.

Although injuries would eventually force his retirement in 1996, Haley briefly resurfaced for the 1998 playoffs to aid the 49ers, and played for them in 1999. Finally out of playing football permanently, Haley turned to assistant coaching, and was a defensive assistant for the Detroit Lions.

Secure Charles Haley for Your Event

Based on your interest in Charles Haley as a speaker or for a personal appearance, Direct Sportslink has provided you additional links below for other sports talent with similar appearance fees, speaker topics, and categories that match Charles Haley.